Imagine you discover a new Kingdom, and the King invites you in to spend some time together.  In your conversation you learn about His heart, and the amazing power He has over an infinite number of things, and continue to be drawn in.  You decide there could be nothing quite better than serving Him and enjoying being a part of His Kingdom forever.  As you become a citizen, you receive a book that has all the ways of this new land written within, but some of them seem beyond reach, and others seem beautiful woven into stories that should be dwelt on, and talked about with others. The King also seemed to hint that this book is growing, and you’re now a part of the grand story.

Excited about this new opportunity you head into the local village.  You can’t wait to learn more about the ways of life in this new land and meet the people who’ve lived here a long time already.  You know already – your life will never be the same.

On your way toward the town square, you get pulled aside by a small group of people.  In this group, everyone seems to be holding their Kingdom book tightly across their chest, as if proving their love for it visually.  Their leader explains he wanted to connect with you while you were still pure. Before you were “influenced” by wrong thoughts or practices.  They invite you to their community, where you’ll have your own room to study the pages of the Kingdom book in private.

Over time and conversation, your frustration with this small community grows.  They won’t tell you anything about others, how they arrived, or what life so far has been like.  They say it would make you impure.  There are some questions you have about one story in particular that doesn’t seem to make sense, but they won’t let you ask others about it – because here only private study is allowed.    This small group of people also seems to have issues that could be resolved by going into the village and talking with others, but they don’t seem interested.  You’re not sure this is the Kingdom you were so excited to be a part of.

One morning you wake, and find a note left by the King himself next to a book on the chair in your room.  He has written, “This may help.”  As you flip through the pages, you find story after story of how others have arrived here, and it begins to remind you of your own journey here.  The ways others discovered this amazing King make you smile as you remember when you first met him.  Some of them wondered about the same mysterious story as you, and here are the thoughts of several who have spent time dwelling on it.   Their insights make your heart beat faster, and you breathe deeply as you continue to turn pages.  All of a sudden, you realize a story from this book is exactly the insight this small community could use to solve a current problem.  Excitedly, you run to the leaders to share with them what you’ve found.  Gasping, they try to take this new book from you.  They explain that the people who wrote and lived those stories did not agree with them 100%, and if you did not hand it over immediately, you would not be able to stay.

As you walked away with both books tucked under your arms, you took a long slow breath of fresh air.  The village stretched out in front of you, and you were filled with a new hope for life together with these Kingdom people. 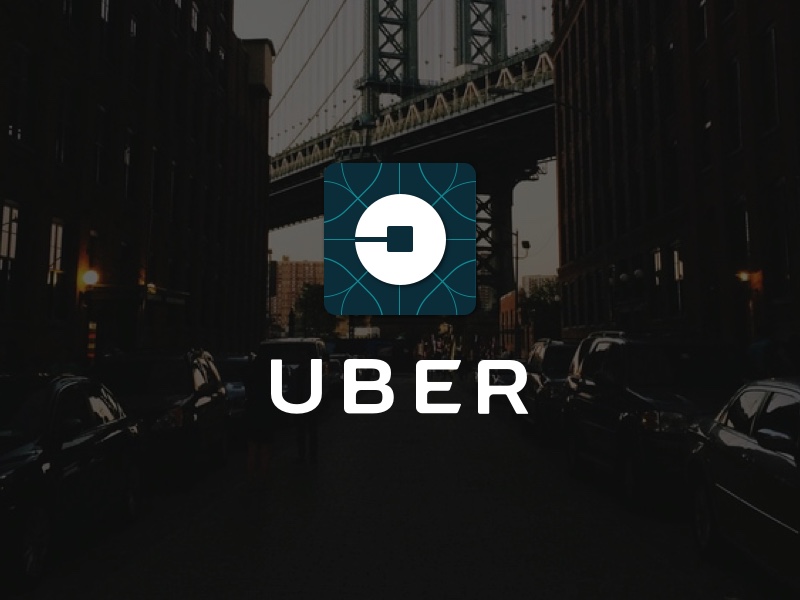 This past week, ride-sharing app “Uber” opened up in our city, only to be followed the next day by “Lyft” as well.  Decatur, IL was finally getting “on the map” in a way that seemed to echo finally being included in “Craigslist” a few years before.  Certainly we’re no Chicago, but we are a greater-area population of about 85,000 – and potential for growth as we were also recently identified as #3 most affordable housing market in the WORLD. 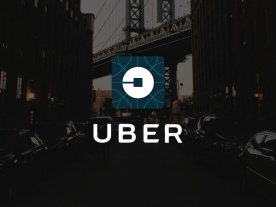 I’m a confessed extrovert, and love meeting new people.  So it wasn’t surprising to my wife when I joked about signing up as an Uber driver, not as a money-making venture, but for fun.  Even after quickly moving through the process, snapping pictures of my documents like insurance and registration, and getting notified I was approved – I didn’t think I’d find myself driving anytime soon.  Although as a pastor there was another layer of appeal.

Fridays are my “day off”, and the rest of my family was occupied at our homeschool co-op.  My wife told me to take the morning to enjoy.  As I sat at Panera, reading the latest edition of Harpers, I flicked the “Online” toggle on my Uber-Driver App, and officially became available.  I figured, it would be fun to give a ride or two, in the midst of my morning coffee.  Ten minutes later, it was obvious Decatur didn’t need many Uber drivers around 9am on a Friday.  Almost an hour in, I realized it wouldn’t be so bad to just spend the morning reading with coffee.

Then it happened.  I don’t even remember much about what the alert looked like. All I could think of was “There might be several Uber drivers getting this same notification, I’d better accept it quickly!”  Boom.  I accepted.  Then I looked at the address.  It wasn’t far, so I loaded up, made sure the radio wasn’t blaring princess music, and began to follow the built-in navigation system within the Uber app.

As I eased my family mini-van into the driveway of a nice quiet neighborhood, a smiling middle-aged man and his wife emerged with two suit-cases.  I quickly asked his name to confirm, though it seemed pretty obvious he was definitely my fare.  I helped load his luggage into my trunk, and opened the door for both he and his wife.  As I started the van, I slid the “Start” button on the Uber app, and asked him where they were headed this morning.  He smiled and said the airport, which I’d kinda anticipated from the luggage.  There was only one issue:

The airport he was talking about was 1.5 hours away in Peoria, IL.

For a brief second, I thought he was joking.  I think he caught my surprise, because he clarified, “You saw that when you agreed, right?”  I looked at my clock, and saw I had just enough time to get there and back before the family came home for lunch.  Why not?  I was honest, however.  Laughing, I confessed I’d not seen it, but it was no problem – let’s go!

He and his wife were very kind, and were in good spirits as they were heading out of town on vacation.  Their flights had been changed last minute, and they decided to try Uber since it had proved useful in previous times of transportation need when they’d visited larger cities.  They even tipped well, although Uber does not require this habit.

Altogether, I enjoyed my coffee and met some new people whom I was able to offer God’s blessings to for their journey ahead, as I dropped them off for their flights.  They’d paid Uber about $75, and I received about $55 of that (plus their gracious tip!).  Probably the most I’ll ever cash in with Uber, since I was just doing it for fun.  I was thankful that their few hours of need happened during my few hours of availability.

I also learned an important lesson: Before you agree to help someone get somewhere, make sure you know where they want to go.  (That’s probably a deep profound truth, eh?)  Next time I’ll make sure I check the request fully, before accepting.  I suppose I could be glad they weren’t heading to an airport in Chicago, or Canada…? lol

Thanks, Uber.  That was fun.  Maybe we’ll do it again someday. 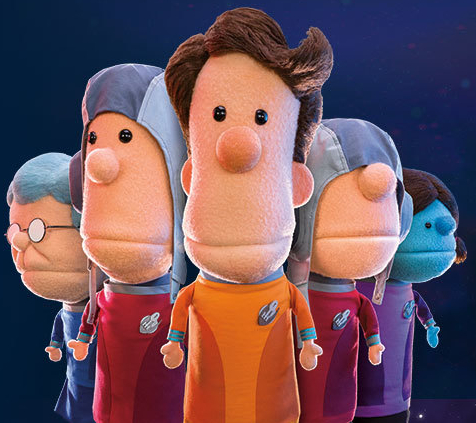 Last week I sat down to watch “Galaxy Buck: Mission to Sector 9″ with my kids, and I was kinda blown away. Here, condensed into a 40 minute children’s puppet movie (with quite a bit of humor), was a potent message. Not just a good message. I mean – take all the current spiritual living, devotional, God/Christ-centered literature that has come out in recent years – this movie will summarize a large percentage of it. 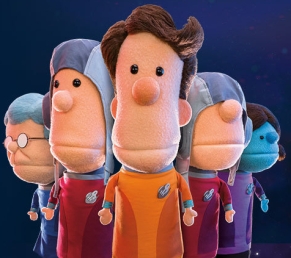 Buck works in a call center for a large ministry, and is discontent because the poster on his wall constantly reminds him “God wants you to do BIG things!” He feels like he’s not accomplishing what God wants, and gets excited when there seems to be a chance. Things go awry, and he finds himself bummed again. Then, in the subterranean levels of an alien planet, he meets someone who rips his goal apart. Literally. He takes Bucks’ poster, and rips it so that the words left read, “God wants you.” I asked my 10-year-old daughter the next day what the message of the movie was about, and she answered clearly the same thing: “God doesn’t want you to do big things, as much as God wants YOU. You’re not a shark, you’re a jellyfish caught in the flow of God’s Love.”

The obvious push-back to that is: “That sounds like an excuse for laziness, and not trying anything.” Certainly it could be manipulated into that. But when we allow ourselves to exist fully in the flow of God’s Love – we have to trust that WILL call us to be actively offering ourselves fully toward the mission of lives, community and creation transformed.  But our activity doesn’t begin with us setting a goal of “accomplishing great things for Jesus”.  It begins with us relinquishing control of everything in our being, into the great Love of God.  That may mean we accomplish great things by the measures of this world, or that mean we lose everything and all noteriety for His sake.

The first step?  Allowing the truth of that ripped poster to sink in.  “God wants YOU.”  Not because of your gifts or talents.  Not because of your heritage.  Not because you’re specifically poised to accomplish what no one else could ever do.  Not because of your purity.  But because He Loves you.  Fully and completely, and without reserve.  Just as much when you were making horrible decisions as He does today.  Most of us have been loved wrong by a human in our lives, and it messes up the kind of love we even see as possible.  So let the love of God sink in a bit, and then release yourself to it.  There is no greater place to exist, or calling to walk forward with…

For more on covenanting with God to do/be whatever He wants, check out this modern version of the “John Wesley Covenant Service” I’ve written for use in a church setting.

For a few words on God simply desiring/loving you as His child, here’s a Spoken Word I recently recorded.