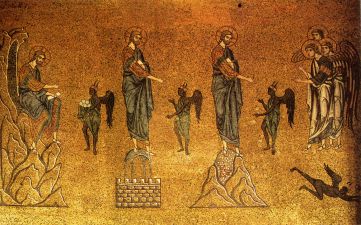 If we’re willing to reject the temptations of Satan, along with Jesus and by the power His Spirit brings through us, big things can happen. All over the world, March 9th was acknowledged as “FREEDOM SUNDAY”. God’s people are being broken for the sake of the poor and lonely, the imprisoned, the trafficked, and the powerless. You see, when humanity gives into the temptations Satan has offered Jesus here…this is what happens. Other people become consumed. Walked on. Imprisoned as objects. Treated like animals.

When we believe that inanimate objects are more important than living faithfully – people (our brothers and sisters) become sacrificed on the altar of low prices. Most of the products you and I use on a daily basis were made from materials and minerals taken from countries where laborers are paid next to nothing – if they’re even paid at all. Now I’m not gonna call us to boycott a specific store, give up clothes, and stop using cell phones. But I am going to ask you – when’s the last time you prayed for those communities? When’s the last time you treated someone the world called “insignificant” with the significance Jesus gives them by dying on their behalf?

Just one of the many reasons our family is in the midst of an adoption process, is to give a voice to the voiceless. To tell a story about a place and a people who are being taken advantage of by the world, and call God’s people to pray. Because as we see in the Lords’ Prayer – how we pray, leads us to how we live.

And that’s only the first temptation. How about the second? When we let go of all that God’s done, and all that God will do in the future – living only according to what it seems like God is doing right now in this moment – it can lead us to wrong thinking. It can make us lose hope, and forget all that God has done. It can seem incredibly hopeless for the 30 Million slaves living in our world today, and those of us who are enslaved by behaviors or sins that we need God to provide freedom from. Instead, we remember that God has provided freedom, and will provide complete freedom and healing someday for every single of the 30 million. Until then…we lift them in prayer, and support organizations and movements that embrace bringing freedom and release from bondage, wherever and however it exists. Even something as simple as sponsoring a child through ICCM can save a child from becoming a slave tomorrow. How is your life connected to Christ bringing freedom in our world?

And finally, the third temptation. The temptation to see statistics like “30 Million”, or Bible verses like “For all have sinned and fall short”, and throw our hands up saying, “We give up.” This is giving value, and bowing to something that does NOT deserve our worship. We believe in a God who is Lord over ALL creation. A God who has provided release from sin and bondage both NOW and FOREVER. We will not worship the forces of evil that pretend to be in control, but we will boldly declare by our life and resources today, GO AWAY SATAN. You have no right to declare ANYTHING over my life. God has already declared powerful words of Love, Grace, Release from Sin, and New Creation, and those are the words that will reign.

And in response, the devil will leave…and we will find ourselves in the midst of those serving God together. The whole world will be transformed as we go out into creation as those who have been set free in Christ. Will you allow yourself to be “of freedom”?  Will you respond as Jesus has, decide even now how you will live before temptation even comes to you?