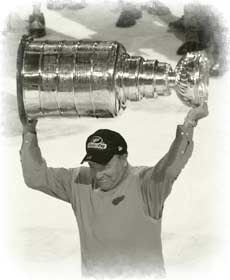 It’s about that time again. The beast that I try to hide from most of you throughout the year, but during the next month or two I simply cannot. NHL Playoffs are about to begin. The Detroit Redwings have 3 games left to play…once against Columbus, and twice against Chicago (who is desperate for a playoff spot….you NEED to watch this passionate of a game).

The quest for Lord Stanley’s Cup….is beginning. You can sense the change in the players, as you watch them compete…even if only on television. The rivalry’s are more intense. The energy level is soaring. This is what every player desires. What every team works towards. What every dynasty is built on.

The last time the Redwings tasted victory like this, was with Yzerman still as captain back in 2002. I have an autographed jersey from just after that win. 🙂

Since that year, they’ve had several chances, but so far have fallen short of what it’s taken. This year, however…is different. I’ll have my lucky stick in hand, IBC’s cracked open, jersey on, and will not be shaving until we’re hoisting the cup…or out of the playoffs.

Most of our best players experienced injuries in recent months, creating a vacuum for the 2nd lines to pick up the slack. They did…and then some. We now have almost all of our best players back on the ice, and a newly developed 2nd and even 3rd line…that are a force to be reckoned with.

With leading scorers like Zetterburg, Datsuk, Holmstrom(if he can get through this injury), Cleary, and lately Franzen…Defensive players like Chelios, Lidstrom, Kronwall, Lilja, (and my favorite, Lebda, even though he won’t hit his peak for like 3-4 years)….and the 2 TOP goaltenders in the league, Hasek and Osgood…..if ever there was a year….this is it.

Get your octopus ready…

Check out some of my Spoken Word