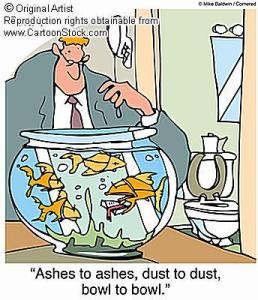 Grandma and Grandpa O. bought Addie her first pet last time they visited. She’s on a BIG Nemo kick lately, thanks partially to cousin Ella “handing down” a stink load of free stuff….it only made sense.

So a while back, we began allowing two goldfish to take up residence in our kitchen. Not as potential food, mind you, but as actual guests. Sure they make the kitchen smell like fish…but it’s worth it to get a smile every once in a while, every time she remembers we have living creatures right here in our house that resemble her cartoon friend. (and Elmo’s pet, Dorothy, as well)

She’s been enjoying the fish on and off for a while.

Today, while Addie was napping, we found the golder of the two…belly up with a smile on it’s face.

Being that Addie is only 21 months old, we decided not to do the whole “burial”, with a short lesson on life and death, etc….just yet. We (I) used the net provided for just such occasions, and donated the dollar-forty-something living toy to the Decatur sewer system.

I didn’t even say good-bye.

I can protect my daughter from the harsh realities of a world that has been transformed to give humanity what we wanted…our way….for a little while longer.

But someday…I’ll have to explain to her growing mind that yes, goldfish die. Lord willing, that will be the hardest lesson I’ll have to teach her for a while. But I doubt that will last long.

I pray I can be faithful to the realities of life, while still instilling in my daughter God’s promise of a new creation. A “setting things right” that will ultimately allow the “goldfish” in our lives to live forever. Not that it makes us miss the goldfish any less, but it certainly gives us something.

One thought on “goldie’s last day…”