When Sarah and I first graduated college, and moved to Iowa to begin our adult life, we decided it was time to roll like adults. My 1994 Saturn SL1 (Hermes) was not going to work on the highway much, and when I was gone, Sarah had to stay home. So we went car shopping. Sarah had always wanted a Honda Civic.

Neither of us had much of a credit history. Most dealerships wouldn’t finance us for anything, much less a decent used car. Ironically, the only place we found luck was a Honda dealership. They were having a special where if you’d just graduated college, they would finance you, but only for a brand new car. So we did it. It was ridiculously new, and lost a ridiculous amount of value the moment we left the lot. But we’ve loved it for 5 years.

Alas, with the trappings of vacation packing for the Anderson family lately…we knew the Honda Civic simply wouldn’t work much longer. So we went hunting again. This time, armed with a credit that….well, at least exists. And a simple dream this time: More room on wheels, and less money to pay each month. And a Honda Civic that was finally paid down to it’s depreciated value…so we could break even. 🙂

After spending many hours at home, hunting and researching for a few weeks. After spending 5 hours at the actual dealership, test-driving, poking around, and speaking with a great salesman…who was still a salesman…we finally found one. 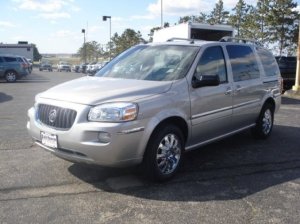 We will now own the road. We will fit our suitcases. We will watch Dora at 70 MPH. We will open our sliding doors from 15 feet away. We will start our engine from our living room, so it has time to warm up. We will own a mini-van that most people haven’t heard of, because they were only made between 2005-2007. But we will rock it like it deserves to be rocked….:)