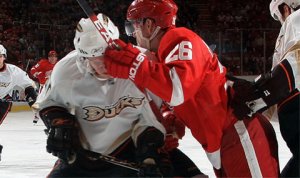 Starting Friday night, the Detroit Redwings will face the Ducks of Anaheim. I’m pretty stoked, simply for the aspect of: 1. Games in Anaheim will be on around 10-10:30pm here, well after the kids bedtime. 2. Game 2 will be played on Sunday, which means it will air on NBC!!! YOU SHOULD WATCH THIS GAME!!!

A small amount of me is worried, because the Ducks have come a long way from being the Disney team of the late 90’s. They’ve got grit, and can handle playoff action well. But Detroit had an easy first round, just tough enough to keep them in shape.

My prediction? Detroit takes the series in game 6 at Anaheim.
Hopefully we’ll get some good overtime action.