We grew up getting some pretty short haircuts. Whether it was lice, cheaper to cut ourselves, or the actual facade of a well-behaved boy simply because his hair is shaved tight…it was done.

Nevertheless, when I became a teen, I branched out. Which led to a horribly awkward phase of growing out a pony tail (which never amounted to much more than a rat tail, with gelled up hair to make it seem it was one long mass of well wrapped hair). Sure, I pretended it was cool, had it in dread-locks a couple times, and even had one odd instance of “fish-braid?”.

But as much as I made fun of them for looking like little girls, I envied the long, straight hair of Hanson (mmmbop), and those like them. My long hair was wavy. And not Hasselhoff wavy, more like…well….the kinda hair you’d look at in the morning and would promptly yell “shove off!!” back to you (if it was British).

Take that past, and add it to the fact that I’m very much thinning a nice bald circle toward the back. It’s presence is amplified as the hair around it thickens. All of this, plus simplicity, leads me to a nice short hair cut. One that I’ve never thought worth paying someone to actually do. Until I met John. His shop is located at 2645 N. Oakland St. at the Tru Temp Plaza, Decatur, IL. 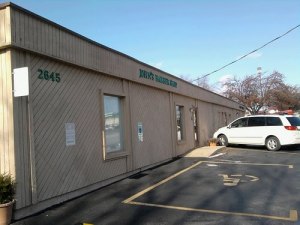 John has been cutting hair for over 40 years. 40 YEARS! Take that, you Supercut novice who smells of cigarettes and talks about your boyfriend drama. He cut hair for the Navy quite some time, before opening his own shop right here in Decatur, IL.

One annoying thing about getting your hair cut, is the itchy neck feeling that usually requires a shower afterwards. John uses a buzzer with a vacuum, leaving NO itchy neck. And towards the end? Shaving cream around the edges, and a nice clean finish with a straight razor. He’ll talk weather, sports, economy, or whatever the other elders in the waiting chairs bring up. Bring your kids, too, and John’s got a sucker for each of ’em. No appointment necessary, just walk right on in. If you got one or two in front of you, it’s usually a great time to hear/participate in discussion on what’s going on in the world. You may even find yourself letting the next guy go ahead of ya’!!!

So if you’re gettin’ a bit long on top, give John a try….tell him I sent ya’.