I’ve confessed before, I’ve got a bit of OCD.  Just enough, that I enjoy an orderly room.  That’s probably not saying enough, 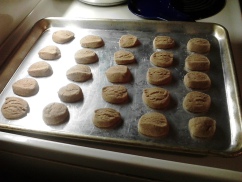 though.  I cannot kick back and relax in a room, unless I’ve tidied it up a bit.  Sometimes that’s annoying or offensive to my wife, as she’ll think I’m doing it with grumbles…but usually I think of it as my way of contributing to the home.  I’m generally at work for many of the days hours, while she does just about everything and then some.  And there’s just something tasty about bringing order to chaos.

Over time, we’re hoping to teach that same appreciation to our daughters.  This can be seen as teaching them responsibility, or teaching them chores, or obedience.  But it can also be seen as connecting them with the heart of God.  Not to say that God is a bit OCD, although sometimes the clouds do line up just so.. 🙂

“In the beginning, God created…”  (Genesis 1:1)  Verse 2 goes on to say that the earth was “formless and void”.  The Hebrew word here is “Tohu wa-bohu”, which is hard to explain, other than saying a great confusing chaos of nothingness.  A churning, orderless place, before God begins to speak into it.  When He speaks, order is brought into chaos.  He continues to do this, as his human creations begin to live their own way, bringing their own bits of chaos once again.  He introduces the “Law”, and brings order to the ways of human existence.  We’ve been created “in His image”, and He is constantly at work to restore that image – not just for our sake, but for the sake of all creation!

It’s easy to think that Jesus is doing just the opposite.  That he was sent to turn everything upside down, bringing about a new kind of “holy chaos” to the ordered world.  But as we read the scriptures, we see that the ordered world that was existing, was not founded on any kind of order that God created.  God’s own people had begun to live by systems and orders that were very much centered on themselves.  Jesus wasn’t simply about “deconstructing” the world as it was known.  As we see in the beatitudes of Matthew chapter 5, Jesus is announcing a new order as he continues to declare himself as Lord.  The citizens of this new Kingdom will not make much sense according to the orders and systems of this world.  But they are learning the new order, and ways of living being offered to new creations who desire to live with Him forever in a renewed creation.

Not that I’m advocating saying to the kids, “Now Junior, do you think God is happy when you leave your dirty socks on the floor?”  This isn’t about learning a new path to manipulating their behaviors.  But it is about pointing out, as we guide our kids towards bringing order to chaos, we are connecting them with a deeply embedded connection to their Heavenly Father.  It exhibits self-control, which also just happens to be a part of the fruit of the Spirit.  May God be with us as we pick up dirty laundry, collect the dishes, and straighten up all the cups in the cupboard….err….you know what I mean. 🙂

One thought on “order.”