Galatians 4:28, “Now you, brothers, Like Isaac, are children of promise.”

This past Monday we went on a “Daycation”.  Our kids had gathered enough “reward marbles in the jar” that we took a homeschool field trip to Saint Louis as a family.  Armed with coupons and special deals, we set out for the day.  We spent a couple hours at The Magic House.  We ate crepes at “Rooster”, where our oldest daughter lost her front tooth. (sidenote: I’m in trouble if our kids ever get seriously injured in front of me….I got so queasy at just the amount of blood/missing space when that tooth 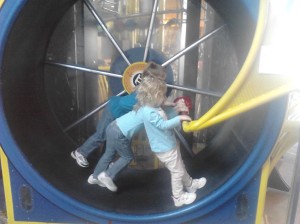 After lunch, we went over to the Science Center to catch (the only decent kids movie in theaters currently) “Flight of the Butterflies“, a real-life Disney-type story of a scientist who investigated where the Monarchs go every year.  It’s seriously a pretty cool story, that I think deserves an actual movie – but that’s another blog post.  What struck me is the actual science behind the butterflies migrating to Mexico each winter.

It’s not as simple as it sounds.  Not every Monarch that’s born, is destined for Mexico.  Most of them only live about 6-8 weeks outside of hibernation.  In fact, it’s only the 3rd generation each year that has the weight, the wing span, and the natural instinct to make the journey.  The first generation is born of a Monarch that came from Mexico….let’s say around northern Texas.  That butterfly goes north to find good breeding grounds of milkweed.  It finally chooses a spot after mating, this one closer to Indiana.  That butterfly heads north as the weather continues to change and finds itself choosing a place to lay eggs up in Quebec.

So far, the destiny of each butterfly has been to provide a good foundation for the generations to come after them.  They are born, they fly north a bit, they lay eggs and die.  But then comes this “generation of promise”.  You can tell, even as a caterpillar, this is no ordinary insect.  From Quebec, this butterfly will make the journey all the way to the middle of Mexico, up in the mountains.  In the Spring, it will return North again to lay its eggs.

There are quite a few different directions you can go with this, but here’s mine:  I want my kids to know they are the “children of promise”.  To speak enough faith, hope, and love into their lives, that they realize God has given them the ability to join Him in transforming the world in ways only they can.

In fact, I want my kids to go to Mexico so bad, I’d be willing to die in the Midwest if it helped. 🙂  Thankfully the illustration doesn’t stretch that far.  God has not only enabled my children to be a part of this “children of promise”, but includes me as well.  That as a family, we can accomplish things for God that Abraham and Sarah could only dream of.  By becoming New Creations, living from the New Life of the Spirit of God that has been poured out, connecting us to the Father in Christ…our Love is more than positive energy.  It is the Kingdom coming…

One thought on “I want my kids to go to Mexico.”