I consider myself a “hopeful person”.  I’ve even attended an optimist club or two.  I believe God has given us plenty of good reasons for being people “of hope” in a world that lives according to, and in service of, so many other things.  I had hope as I was growing up, that my circumstances did not define the trajectory of my life.  I had hope throughout college that whatever experiences were potential, were precisely that – POTENTIALLY available.  I took so many chances, and put myself, literally, on stages throughout college….and have the wife to prove it. 🙂

But these hopes pale in comparison to the streams of hope that have been winding and chiseling away at the canyons of my life for generations before I even arrived.  Hope, not simply that my life matters and can contribute something positive to the vast existence of humanity.  But Hope that my life can connect to something even larger than myself, something tangible and eternal.  Something that is much more solid than “wishing on a star”, and is empowered by something outside itself..something supernatural, and yet making a very real, transformational difference in our world today.  A difference that brings life beyond measure. 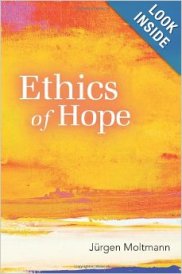 If you’re still with me, I’ll reward you with a quote from the book, “Ethics of Hope” – “The peace of God is not an ideal–beautiful, but for us mortal and fallible human beings unfortunately unattainable.  Nor is it some far-off future at the end of our laborious days on earth.  It is the immediate present in our hearts and in the mystery of the world.”

This is a book for anyone who’s ever believed and agreed on the hope we have and live by as Christians, but find it increasingly difficult to know how to articulate just what that hope looks like/means/moves in a world where it seems so foreign a language.   This book has taken me a very long time to read through (started it in July, just finished yesterday), simply because I’ve been reading it in very small chunks.  At least once a week, I’d “take a walk” with Moltmann, or sit at the foot of his chair by the fireplace, or near him as he feeds a broken and hungry body, or hold the hammer as he inspects the ploughshare he’s been pounding from an iron broadswoard (note that he’s not simply “not using a sword”).  These words have the power to inspire incredible movements of God’s people as they seek to live practically in ways that transform our world by revealing the tangible and presently active Hope of God’s Kingdom in our midst.

“They surround the disabled with compassion and take in the unemployed and the homeless, and provide meals for the hungry.  For this the churches are valued by many people, and in Germany are supported and furthered by the state.  But they are also used by state and society in order to limit damage caused by their systemic injustice.  In order to prevent this, Christian service to the victims of this society must go hand in hand with public, prophetic criticism of the abuses resulting from the systems in force.” – Jurgen Moltmann

As we stand on the precipice of 2014, amid the cacophone of typical “New Years Resolutions”, what Hope draws you forward into all God offers for the year ahead?  What will it look like as what is unseen becomes seen in and through your life this year?   May we be people who are not only known for being “hopeful”, but as people whose hope is actively clashing with the forces that diminish and quiet the Righteous call for Hope in a world God has already claimed for His Kingdom…