If you’re like me, you’ve had people fillin’ up your Facebook feed with how incredible this new Disney horror story, “Frozen” is.  Apparently a lot more people are into kids’ growing up without friends, experiencing the death of both parents, and men being intimate with reindeer than I realized.  A little girl realizes she’s a bit of a freak (I realize that’s harsh, but she hasn’t realized she’s a certain race/sexual preference/physically disabled/or whatever symbolism you wanted to give it……she’s realized she magically turns everything/everyone around her to ice.  THAT is freaky.), and to keep her and the world both safe, they’ve locked her up and taught her to keep her talent hidden.

Okay sure, the music is a bit catchy.  Until you realize that song you’re humming (Do you wanna build a snowman?) is the tune that told the story of two sisters being harshly separated, and containing a montage of scenes where their parents are both drowned off by Disney in an effort to force the story forward (such a force returns multiple times throughout the movie), leaving lonely girls in a dreary kingdom.   It’s silly that the credits even say “Based on (or Inspired by) ‘The Snow Queen’ by Hans Christian Anderson”.  The story has very little in common, beyond snow.

So I was content to “Let It Go” (pun intended) until this past week I was flooded with “likes” on this particular post, 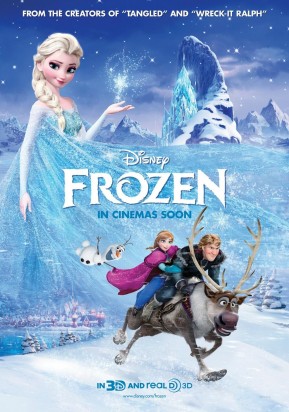 praising the “subversive nature” of the movie.  Now I had to speak up.  Subversive?  Messages that teach my daughters how to be strong/healthy young women?  Let’s be honest, our kids aren’t paying attention to the underlying subversive psychologies hidden in the movie.  As my 3 daughters belt out the words from every song off the soundtrack (yup, we’ve got it), it’s obvious what messages they’ll be getting from this movie (beyond wanting freeze superpowers): The Songs.  Let’s take a moment and appreciate, one song at a time, how dangerous those messages are:

1. Frozen Heart – Okay this one is alright.  Although when they dance to it, my girls imagine themselves as masculine ice-cutters, swinging away their giant ice cutting devices to the rhythms.  Once again my point is made.  My daughters aren’t encouraged here to “break through” to any “frozen hearts”.  They’re encouraged to pretend they are ice harvesters.  Perhaps that IS subversive, as we all know how sexist the ice-harvesting industry can be.

2. Do You Want to Build a Snowman? – Point made above. And right when my girls “get into the song”, there comes a musical interlude where our 4 year old says, “This is where the mommy and daddy die, right dad?”  Thanks, Disney.  Nothing lifts spirits like hearing your daughters sing a song about being the sister who’s ignored.

3. For the First Time in Forever – How long before someone uses this song to make fun of homeschooled kids?  I do enjoy the confusion between being “elated or gassy”, though.  But it’s downhill from there, to a girl who can’t wait to meet “The One”, and hoping to be noticed by anyone to affirm her self-worth.  The song closes with her sister joining in, & seeds being planted about a future song bashing on self-control/temperence.  Can’t wait…

4. Love is An Open Door – Subversive indeed.  She meets a guy the first time she leaves the castle, and they fall instantly in love.  Such incredibly well-established love obviously opens the door to a life of bliss together…or at least, enough bliss to last the song.  Do we want daughters who get disappointed every time they leave the house, that they didn’t mean a man who swept them off their feet to music?  To look forward to finally finding the guy who will open up the life they’ve truly been waiting for?  That’s right….being single is nothing but a closed door, girls.

5. Let it Go – A song celebrating a lack of self-control, and celebrating being so far away from people you can do whatever you want without worrying about hurting them by being the horrible person you are.  Zero accountability means I can never do anything wrong, right?  Let my storm loose, and who cares about the consequences?  At least I’m being “who I really am”.

6. Reindeers Are Better Than People – Awkward animal-loving Hans, teaching our kids to distrust every other human being.  ‘Nuff said.

7. In Summer – Okay, so I actually love this song.  But my kids are learning to be horribly dishonest to talking snowmen as they snicker listening to it.  Someday that’ll come back to bite us.

8. For the First Time in Forever (reprise) – A sung dialogue where one sister finally understands her sibling, and offers her loving support.  Her sister refuses the help, and tells her to go away. “Dad, this is where she makes a snow monster, right?”  Once again…not behavior I’m wanting my kids to model.

9. Fixer Upper – Sure he walks funny, gets grumpy, has weird feet, smells gross, has a weird thing for reindeer, runs funny, and is socially impaired…but he’s sensitive and sweet!  And no matter that she’s already engaged to be married, as long as she’s not wearing a ring it’s insignificant.  A “little bit of love” is all you need to become blind to whatever is wrong.  The song even reminds us “people don’t really change”.

10. Let it Go – (Demi Lovatto version) Not even sure why this one was needed.  Perhaps to remind our older daughters who notice the difference, “Do anything you want like the princess, but understand that no matter how you do – they’ll eventually hire someone who can do it better.”  Nice.

So there ya’ go.  The actual soundtrack has a 2nd album with songs that didn’t make the cut, and lots of instrumentals.  But I think there’s enough to mess up our kids right there.  Sure, the story comes around to sisters loving each other, and warming hearts, and saying goodbye to the guy she thought was “The One” instead of gettin’ hitched. But none of those important bits of the movie are important enough to warrant a song….and thus….forgotten until next time they watch it.

Ps.  I mean very little of what I’ve said here.  I got carried away.  I think I just really love “Tangled” too much, although the music for Frozen is pretty darn catchy.  Can’t get it out of my head.  Almost….subliminal, actually.

(PPS – If you really enjoyed “Frozen”, you may enjoy the post I wrote from the opposite perspective. Same exact approach. :))