Last week, we gathered a group of mostly senior highers together from all over Oklahoma, Nebraska, Kansas, Missouri, and Illinois.  The goal was to take 36 young people through a few days of learning about our history as the Free Methodist Church, hear what God is currently doing through us, and look forward to how they fit uniquely into the future directions of our movement.  It.  Went.  Awesome.

One of the “Group Times” involved students taking important dates from our timeline, and important aspects of what defined us as we began the FM Church – and finding unique ways to remember them.  Here are a few our group came up with:

2. Heinz 57 Sauce is red, like a stop sign.  It was in 1857 that BT Roberts was told by his church to STOP some of the stir he was causing toward certain freedoms he believed were vital to the life of a Christ-follower.  Just one year later, in 1858, his ordination and credentials were removed.

3. So, since his church had “86’d” his role as a minister, he began a new movement by inviting like-hearted followers of Christ.   He began “Peeking” into a NEW movement (denomination) in 1886 in Pekin, NEW York.

4. From the very beginning, this movement embraced 5 essential freedoms along with the ordination of women:

S- Slaves should be freed!

P- Pews should be free! (Many churches in those days had begun “renting/selling” pews, with more expensive seats toward the front.   So an unofficial “caste” system had developed within the churches, leaving many people without a place for worship.)

E – Freedom of Expression in worship.

S – Freedom from “secret societies”. (Much drama was being caused in the church by members uniting in a secret society, and then approaching the church with a desire and ability to control what was happening within.  BT Roberts himself was falsely accused of this.)

Yup, that’s right….just about every one of the 7 small groups of teenagers came up independently with the acronym “S-P-E-W-S” to remember the 5 freedoms we embraced from the very beginning.  There was a beautiful moment on one of our last evenings out on the town, where our teens were approached by a stranger who asked what group we were.   They told him “Free Methodist Youth”, and he was confused.  He’d heard of Methodism, but not the “Free” kind.  They proceeded to explain to him, using the very elements listed above.   The teens thought perhaps we’d planted him in the crowd to test them!  It was great confirmation of 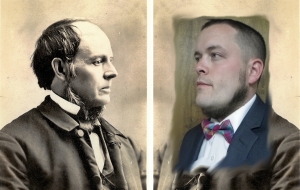 the importance of what we’d been doing all week!

Later on, we discussed the 9 points of emphasis our church is currently embracing here in the US.  Many of the teens were freakin’ out, because they’d talked earlier in the week about what they really want changed in our church, and this was almost an exact list of what they’d come up with!  Just another reminder for us not to simply give nods to our young people, but to listen to what God might be speaking through them.

Oh yes….and BT Roberts was often sporting a neck-beard.  I happened to have an NHL play-off beard that needed shaving.  It was perfect timing to illustrate what a neck-beard would look like in person…..